What are the different types of screw heads? 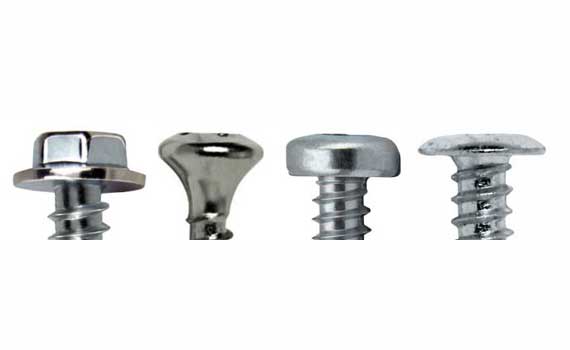 The use of screws is crucial to a wide variety of industries, from construction and engineering to making furniture and advanced machines.

Today there are many types of screws for different applications. A screw comprises the thread, the neck, and the head, and each one has an important role to play. In this article, we will describe the different types of screw heads, their main characteristics, their advantages and their applications.

The head of a screw is located at the top, it is the widest part and it is what allows the screw to turn with the help of a screwdriver. It is the shape of the screw head that determines which tool should be used to fasten the workpiece.

Pan head screws are used in carpentry, brasswork, and metalwork, as it is necessary for these works to keep the screw head submerged in the surface or at the same level as it is. The screws are ideal for preventing injuries in the event that they come into contact with the human body.

Countersunk screws have a head angle of approximately 80 degrees. Their conical heads allow the screw to remain at the same level as the position where it is installed without protruding above the surface.

Countersunk head screws are used when a smooth surface is required. They generally use it in carpentry, brasswork and metalwork, since in these works it is necessary to leave the screw head submerged with the surface or at the same level. Common applications include: bridge decks, walkways, and handrails.

The hex head screw has a hexagon-shaped head and is used for mounting or fastening parts as well as pressure. The hexagonal head screw is one of the most used in construction and in industry in general.

Among the screws with a hexagonal head are those that have a pivot, which allow joints with great tightening and the possibility of immobilizing the joint, using a pin in the pivot. Hex head screws may also have full-bearing washers, or flanged heads with bonded washers. Those with a hexagonal head with a flange, their advantage is that they do not require a washer between the head and the piece you are working on, as well as allowing you to apply a great amount of torque.

Low head screws are used in precision applications where reduced head clearance can be a problem. Due to its reduced head it cannot be squeezed to high levels. They are available in stainless steel, carbon steel, or alloy steel, which means they are corrosion resistant and can be used in underwater applications

Our website uses its own and third-party technologies and we process personal data such as IP addresses and cookie identifiers to analyse your browsing and provide greater security. You can configure and review your controls whenever you want.
Cookie SettingsContinue with Recommended Cookies
Manage consent

This website uses cookies to improve your experience while you navigate through the website. Out of these, the cookies that are categorized as necessary are stored on your browser as they are essential for the working of basic functionalities of the website. We also use third-party cookies that help us analyze and understand how you use this website. These cookies will be stored in your browser only with your consent. You also have the option to opt-out of these cookies. But opting out of some of these cookies may affect your browsing experience.
Necessary Always Enabled
Necessary cookies are absolutely essential for the website to function properly. These cookies ensure basic functionalities and security features of the website, anonymously.
Functional
Functional cookies help to perform certain functionalities like sharing the content of the website on social media platforms, collect feedbacks, and other third-party features.
Performance
Performance cookies are used to understand and analyze the key performance indexes of the website which helps in delivering a better user experience for the visitors.
Analytics
Analytical cookies are used to understand how visitors interact with the website. These cookies help provide information on metrics the number of visitors, bounce rate, traffic source, etc.
Advertisement
Advertisement cookies are used to provide visitors with relevant ads and marketing campaigns. These cookies track visitors across websites and collect information to provide customized ads.
Others
Other uncategorized cookies are those that are being analyzed and have not been classified into a category as yet.
SAVE & ACCEPT