Home » Nail gun how to use and what types exist

Nail gun how to use and what types exist 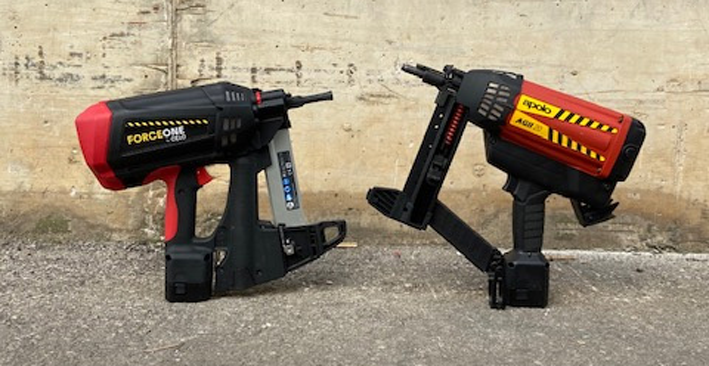 If you are into power tools, you might have wondered a couple of times “what is a nail gun exactly?” or maybe “how does a nail gun work?”

If that has definitely been the case, then you arrived to the right place.

Also known as a nailer, the nail gun is a power tool that allows you to consistently drive nails or brads into other objects and materials quickly. In essence, a nail gun helps you accomplish what a hammer would, but in record time.

However, operating one might not be as straightforward as it is with a hammer, so learning how to do it properly is a must.

How to use a nail gun step by step

Protect yourself before even picking up a nail gun by wearing the necessary gear. Also, make sure to maintain it unplugged until it is loaded, and to check your manufacturer’s manual to know which surfaces you can use it on.

It is also advisable to get familiar with the tool before ultimately using it.

Independently of its type, a nail gun usually has a magazine where you deposit the strings of nails on. To do this, all you have to do is press the latch that unlocks the magazine, insert the string of nails, and put it back in.

Once you are ready, firmly place the nailer on the surface you chose, making sure it is in a straight angle. Then, pull the trigger once and release; you should be able to see the nail on the surface after that.

There are three main types of nail guns according to their overall system: the power source and the way they function.

Though they need a generator or an electric source to work, their functionality resides in the release of pressured air, through an air hose, onto the nail gun itself.

If you are wondering “how does a gas nail gun work?” the explanation is very simple. Their design is based on the same principles as the pneumatic nail guns, but instead of compressed air, it works with pressured gas and a battery.

Electric nail guns can depend on either lithium-ion batteries or power cords to function, so its internal system works solely with electric energy.

What maintenance does a nail gun need?

As with any power tool, nail gun maintenance is something you should seriously care about.

The specifics will depend on the type of nailer you own, but you can primarily focus on thorough cleaning, especially since this prevents particles from clogging your tool. You will also want to regularly and closely inspect it, in case there is anything loose due to the normal jolts that occur during usage.

In the end, the right care-taking routine is what will elongate the nail gun’s lifespan and ensure it keeps working properly.

Our website uses its own and third-party technologies and we process personal data such as IP addresses and cookie identifiers to analyse your browsing and provide greater security. You can configure and review your controls whenever you want.
Cookie SettingsContinue with Recommended Cookies
Manage consent

This website uses cookies to improve your experience while you navigate through the website. Out of these, the cookies that are categorized as necessary are stored on your browser as they are essential for the working of basic functionalities of the website. We also use third-party cookies that help us analyze and understand how you use this website. These cookies will be stored in your browser only with your consent. You also have the option to opt-out of these cookies. But opting out of some of these cookies may affect your browsing experience.
Necessary Always Enabled
Necessary cookies are absolutely essential for the website to function properly. These cookies ensure basic functionalities and security features of the website, anonymously.
Functional
Functional cookies help to perform certain functionalities like sharing the content of the website on social media platforms, collect feedbacks, and other third-party features.
Performance
Performance cookies are used to understand and analyze the key performance indexes of the website which helps in delivering a better user experience for the visitors.
Analytics
Analytical cookies are used to understand how visitors interact with the website. These cookies help provide information on metrics the number of visitors, bounce rate, traffic source, etc.
Advertisement
Advertisement cookies are used to provide visitors with relevant ads and marketing campaigns. These cookies track visitors across websites and collect information to provide customized ads.
Others
Other uncategorized cookies are those that are being analyzed and have not been classified into a category as yet.
SAVE & ACCEPT